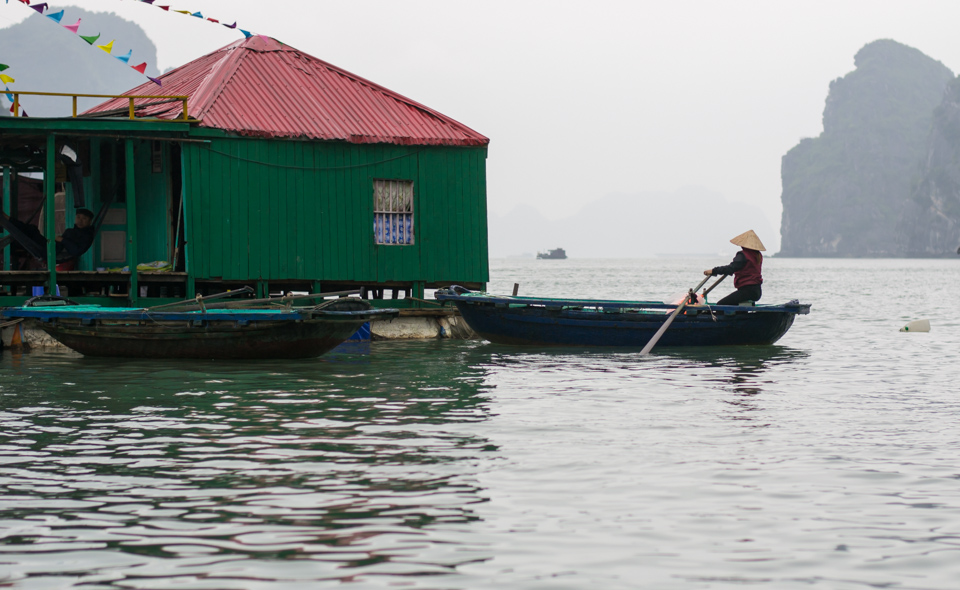 My first stop in Vietnam was the capital, Hanoi. Though my time was short here, one thing I can say is this place has an unmistakable frenetic energy. It seizes you moment you step foot onto its turf. Exhausted from the journey prior to my journey to Vietnam (think…overnight buses and sleeping in airports) I was so glad I opted to have car service pick me up from the airport. I had not the patience or energy to haggle with taxi drivers.

The drive to my hostel, in Old Town Hanoi, was about 30 minutes from the airport. This was my first taste of Vietnam traffic. It was insane, for lack of a better word. Motorbikes overrun this bustling city. I later learned that there are approximately 4.5 million of them just in Hanoi alone. 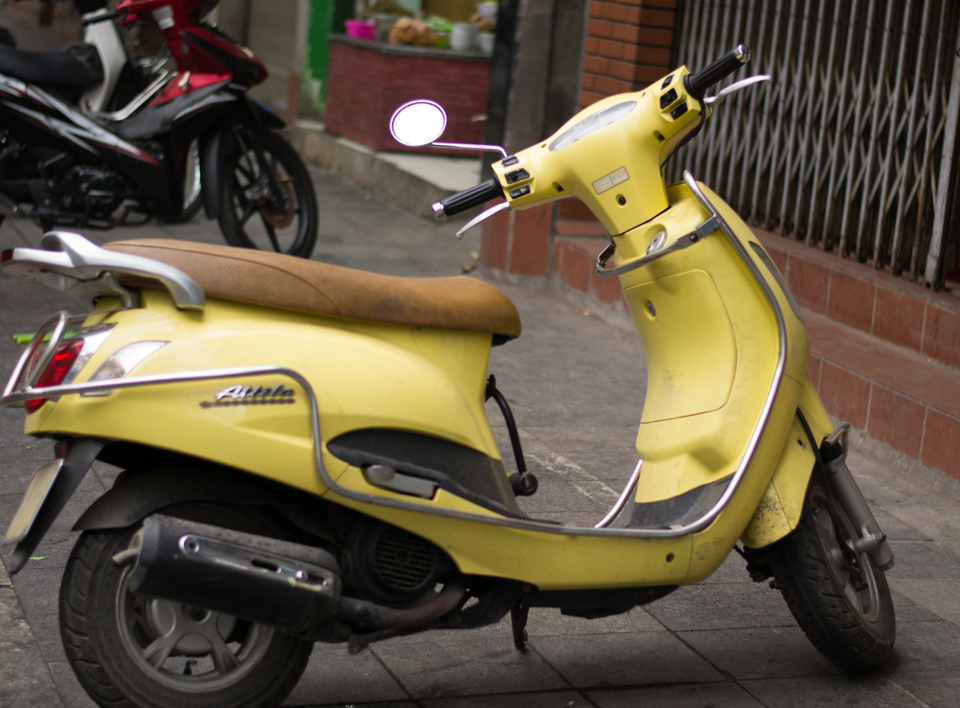 Everyone wove in and out of traffic, driving wherever space was allotted. I came to the conclusion that there is no “right side of the road”; it’s more like “get in where you can fit in”. Horns blaring from every direction, cars and motorbikes driving into oncoming traffic (honking at you as if you are in the wrong), cows walking along the side of the road only a few feet away from traffic, no one stopping at stop lights or intersections; it was pure madness. Several times I had to put my head down because I did not want to bare witness to my impending death by way of motorbike. It’s that intense. 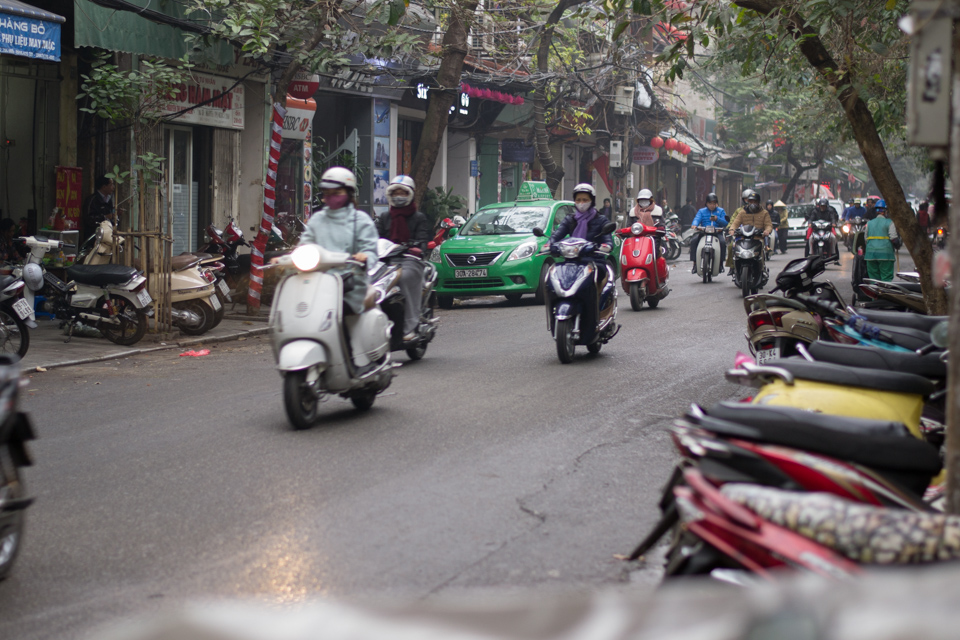 But, as you can see, I survived to write about it 🙂

It was late evening when I arrived. So, I strolled around town a bit, before settling on a quaint little eatery, called Greet Restaurant, for dinner. It had a decent amount of both local and foreign patrons, so I figured it must be worth a try. I was able to snag a table outside, perfect for people watching, one of my favorite past times. I watched as Vietnamese vendors paraded the streets soliciting flowers, vegetables, newspapers, and every tchotchke imaginable, and as fledgling tourists played Double Dutch with traffic. 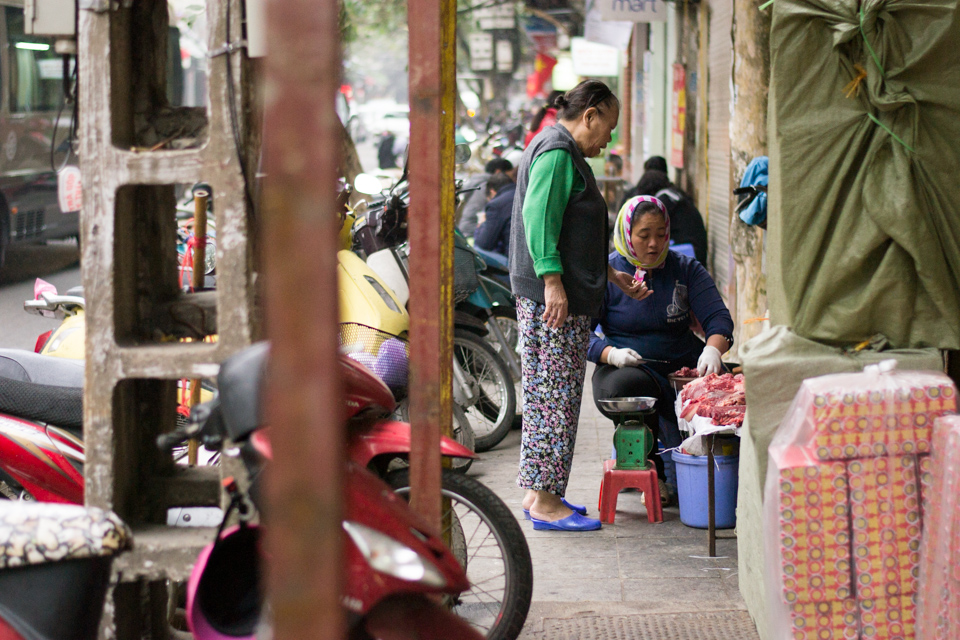 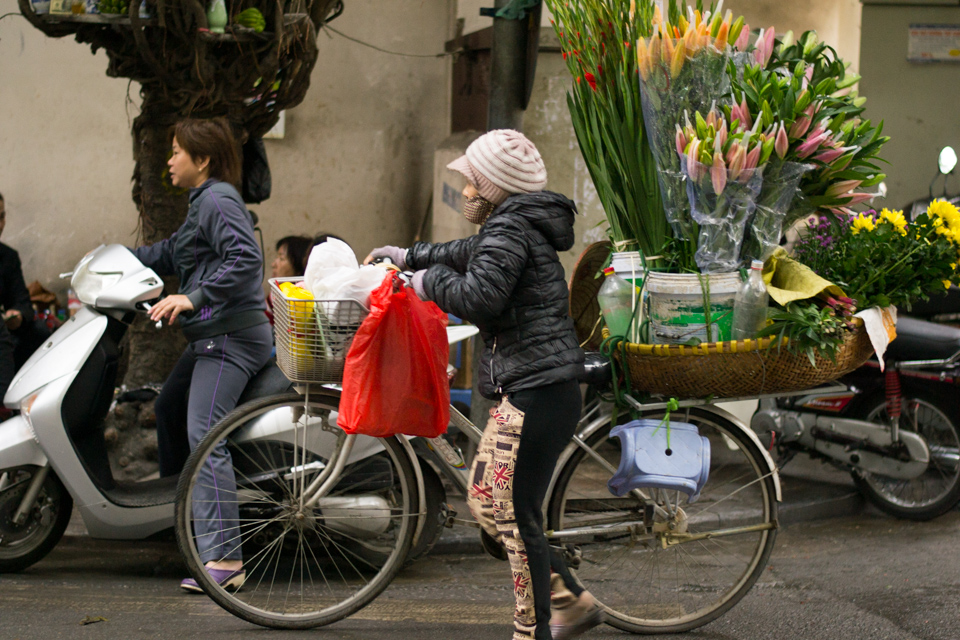 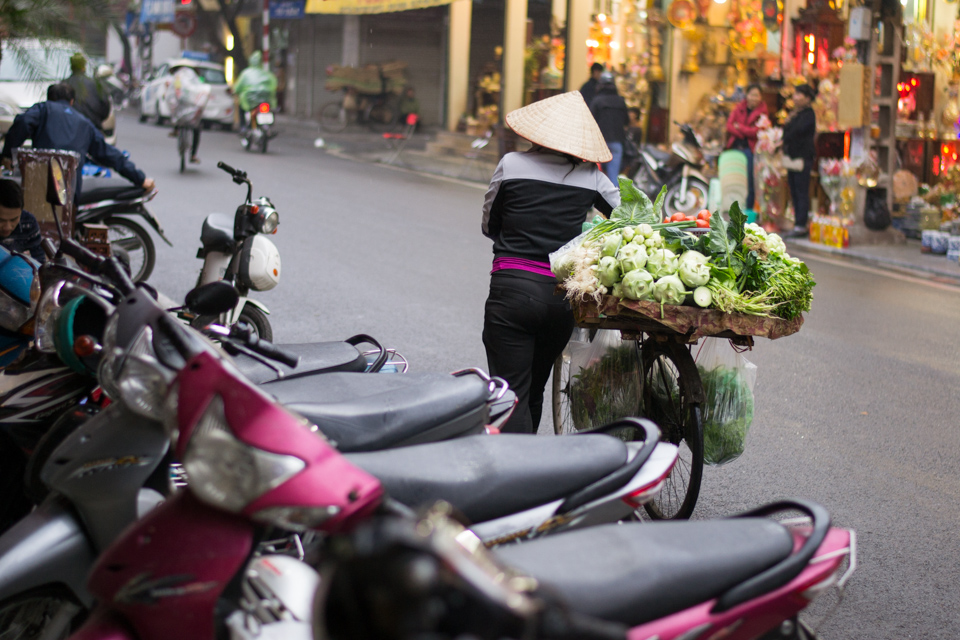 Sidenote: This (crossing the street) is an adventure in itself! I learned very quickly to simply do as the locals; keep your arms close to your side and just go for it. If you wait for a break in traffic you’ll be waiting a lifetime, so you just have to walk. But, word to the wise, once you make that decision you’d better own it! No impulsive moves, and definitely no hesitancy or you’ll likely be a goner. I found that motorists will simply go around you, whether you are standing in the middle of the road or if you continue walking. There was one instance when I was crossing a huge intersection, but I’d miscalculated my timing. I’d already started making my way through traffic. I couldn’t stop, I couldn’t stall, so I literally dropped my head, didn’t look at the oncoming traffic, and just kept walking. My heart was beating out of my chest, but I made it, unscathed! It was extremely dangerous, on my part, and I should have definitely been more cautious, but it goes back to what I said about having to own your decision.

Now, back to story at hand…

Dinner was amazing and CHEAP! An appetizer, entrée, and cocktail only set me back about 9 bucks! I’m in love with Vietnam already!

After dinner, I had my sights on dessert. So, I did a quick Google search and stumbled across Kem Fanny, an ice creamery. I was sold. So, I strolled through the city on a mission (thank God for Google maps), taking in the indelible architecture that gives way to the French occupation of Vietnam in the late 19th century. It somewhat puts me in the mind of New Orleans given it’s heavy French influence as well. Finally, I arrived and enjoyed a platter of 8 small samples of ice cream and sorbet. This was perfect for me! I love options!

Tired from my long journey, I retired to my room to get some rest, preparing myself for another long day at Halong Bay and an overnight train (more on that later).

The next morning I had my first bowl of traditional Pho for breakfast. I don’t quite know how I feel about it just yet. The jury is still out on that one. After breakfast I perused the streets a bit, before my shuttle bus came to scoop me for the 3-hour journey towards Halong Bay, a UNESCO World Heritage Site. Due to time limitations I opted for the day trip only. However, there are many options available for overnight and multi-day cruises.

Even an overcast and drizzly day couldn’t put a damper on the magnificence of Halong Bay. We cruised out onto the bay on a junk boat, enjoying lunch and the incredible views of the towering limestone pillars. 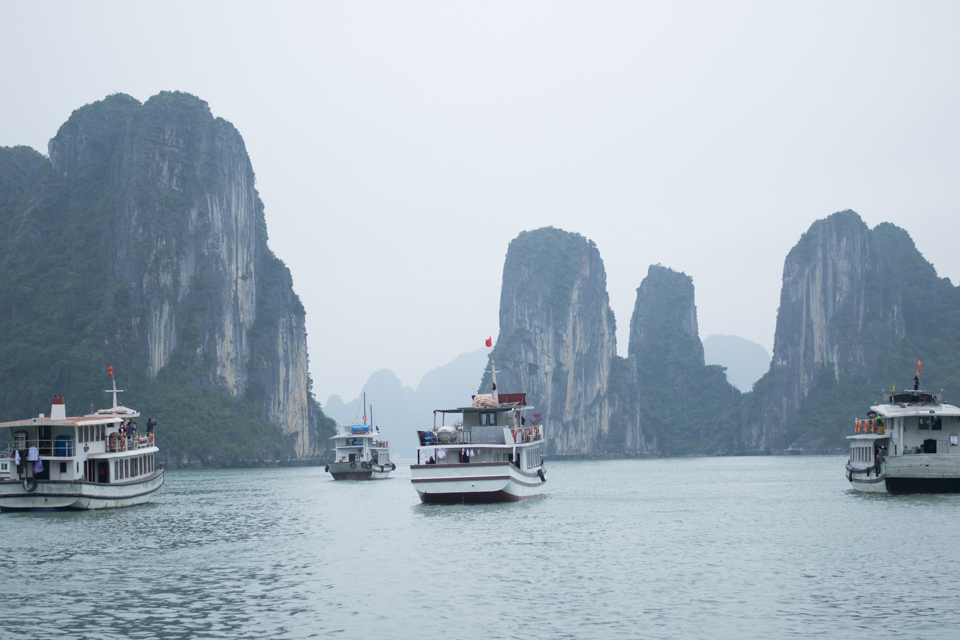 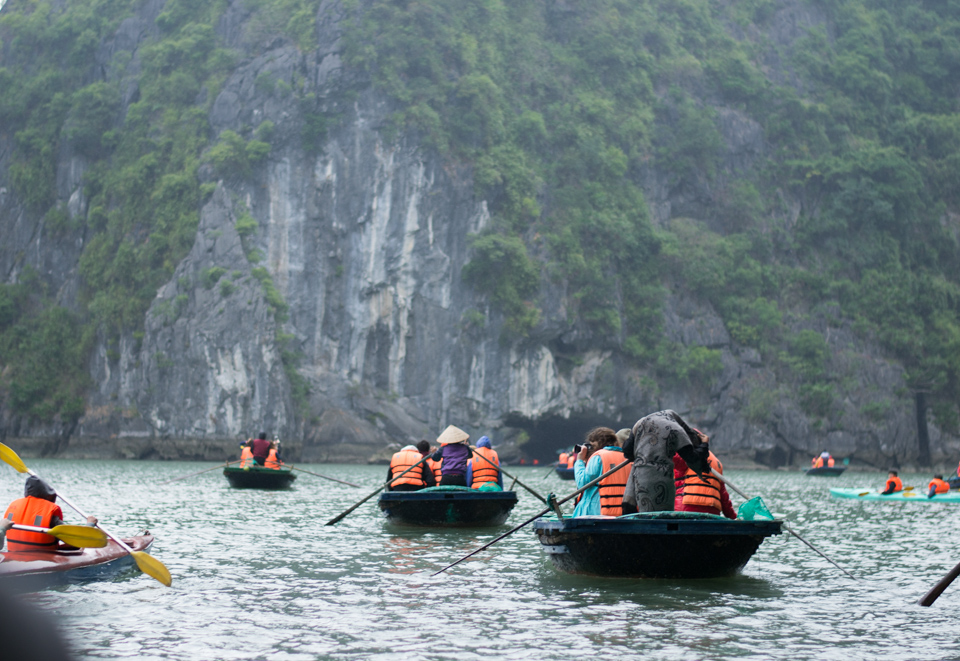 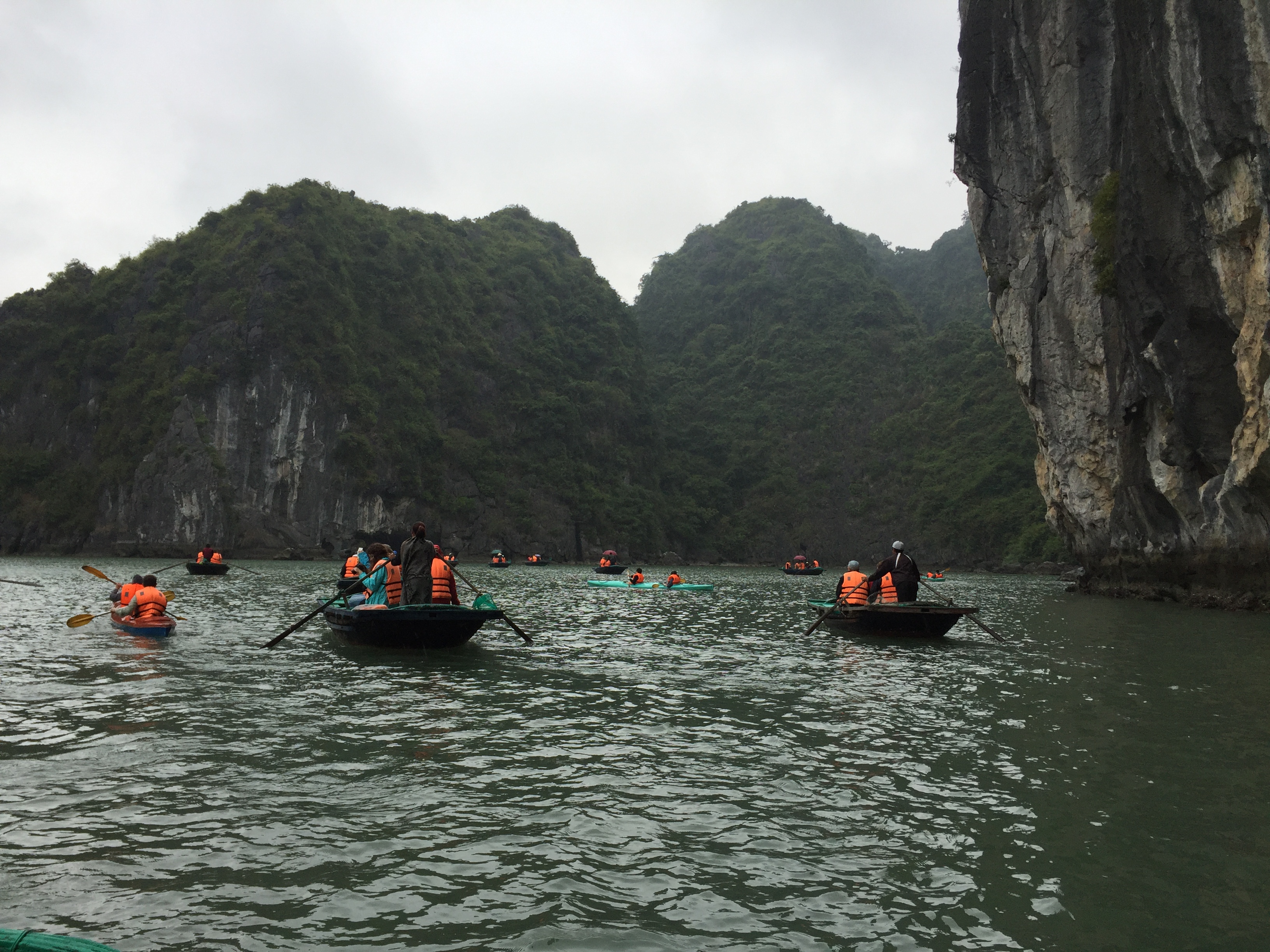 Our group consisted of about 18 people. There was an eclectic mix of people from all over the world. I shared travel stories with a girl from Holland, befriended a guy from New Zealand who voluntarily peeled prawns for me (and his Argentinian wife it’s in their vows), because food with eyeballs still in tact freaks me out, and somehow landed an instahusband, for the day, from America. I met so many others, but these are the ones that stuck out. That’s the joy of traveling alone…you’re never really alone. 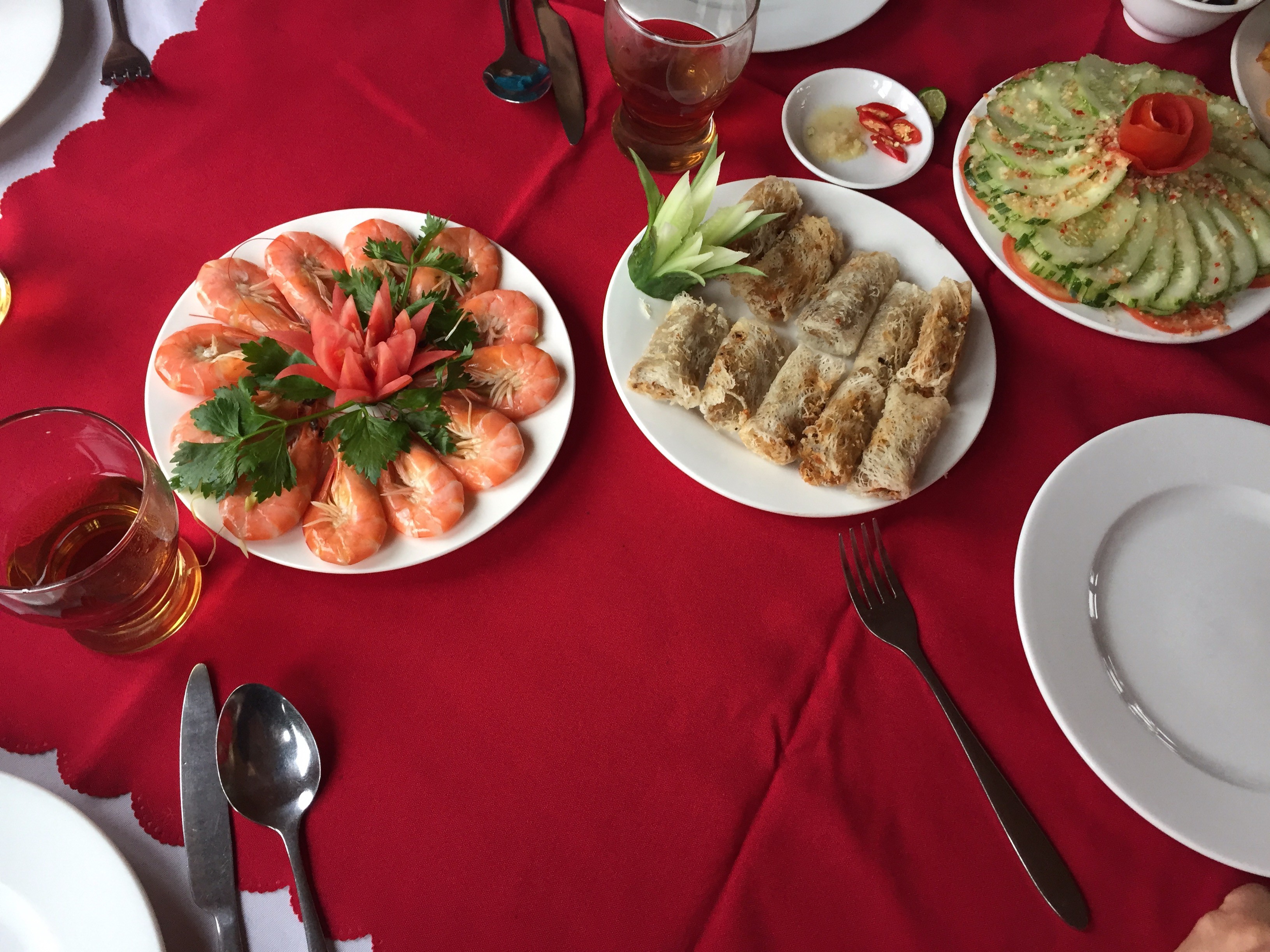 On our tour we visited a floating village and had the option to take a bamboo boat ride around the bay, or kayak on our own. I opted for the bamboo ride as it was a somewhat cool day and I wasn’t up for getting soaked in a kayak. Afterwards we explored one of the many caves in Halong Bay. It was such an incredible site! Everything about this day was incredible. 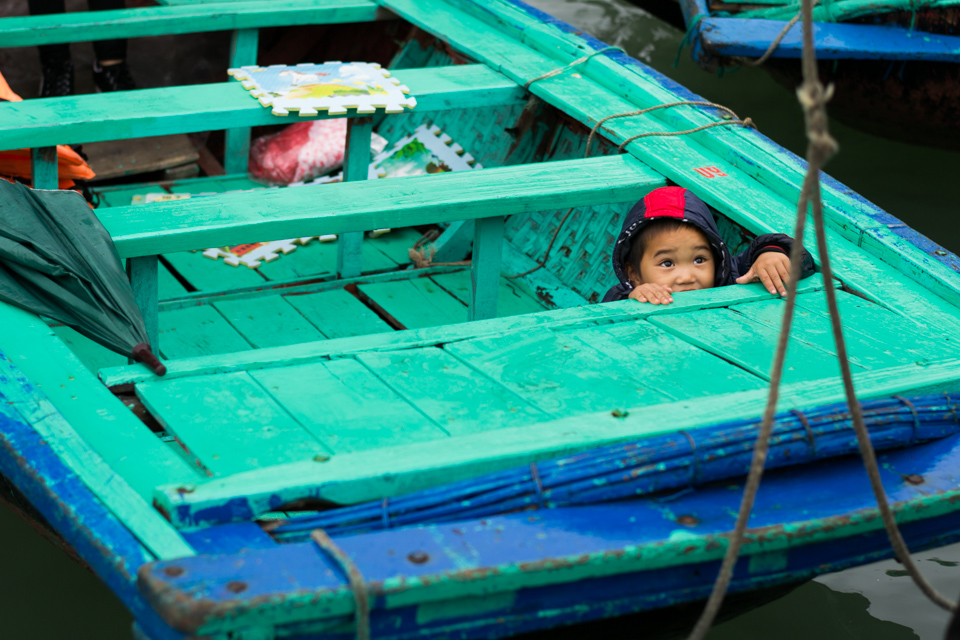 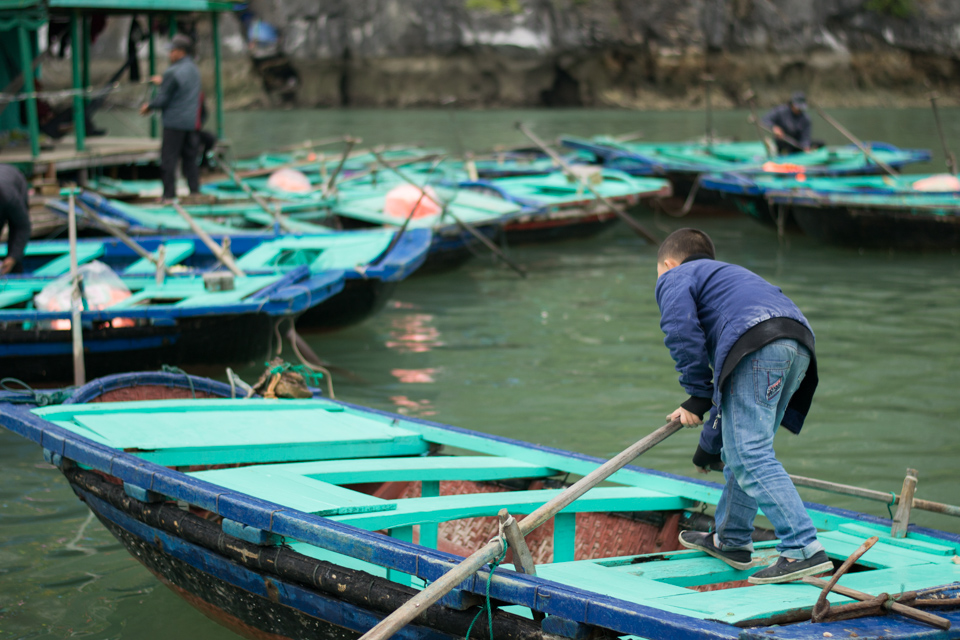 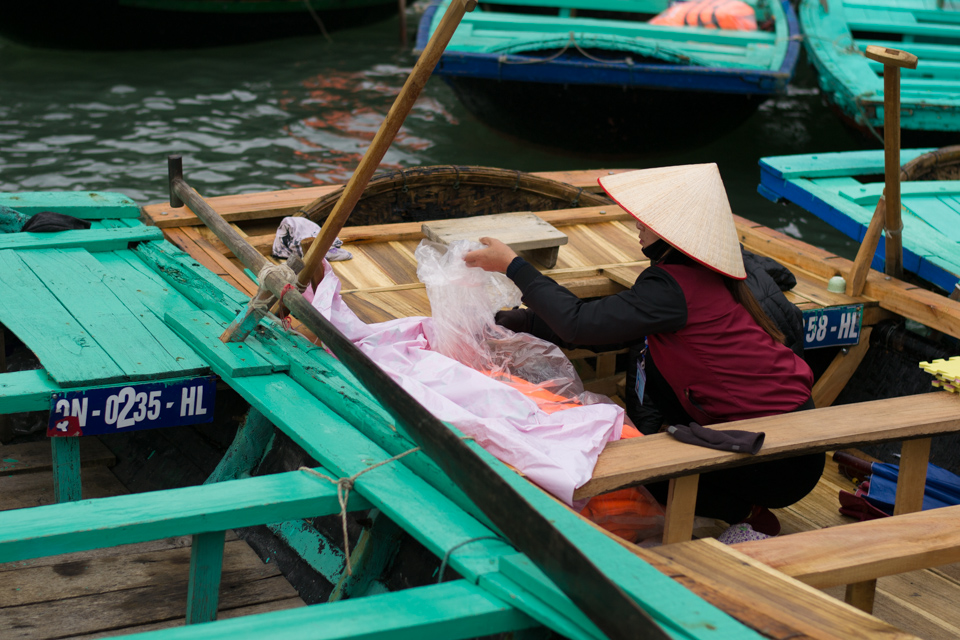 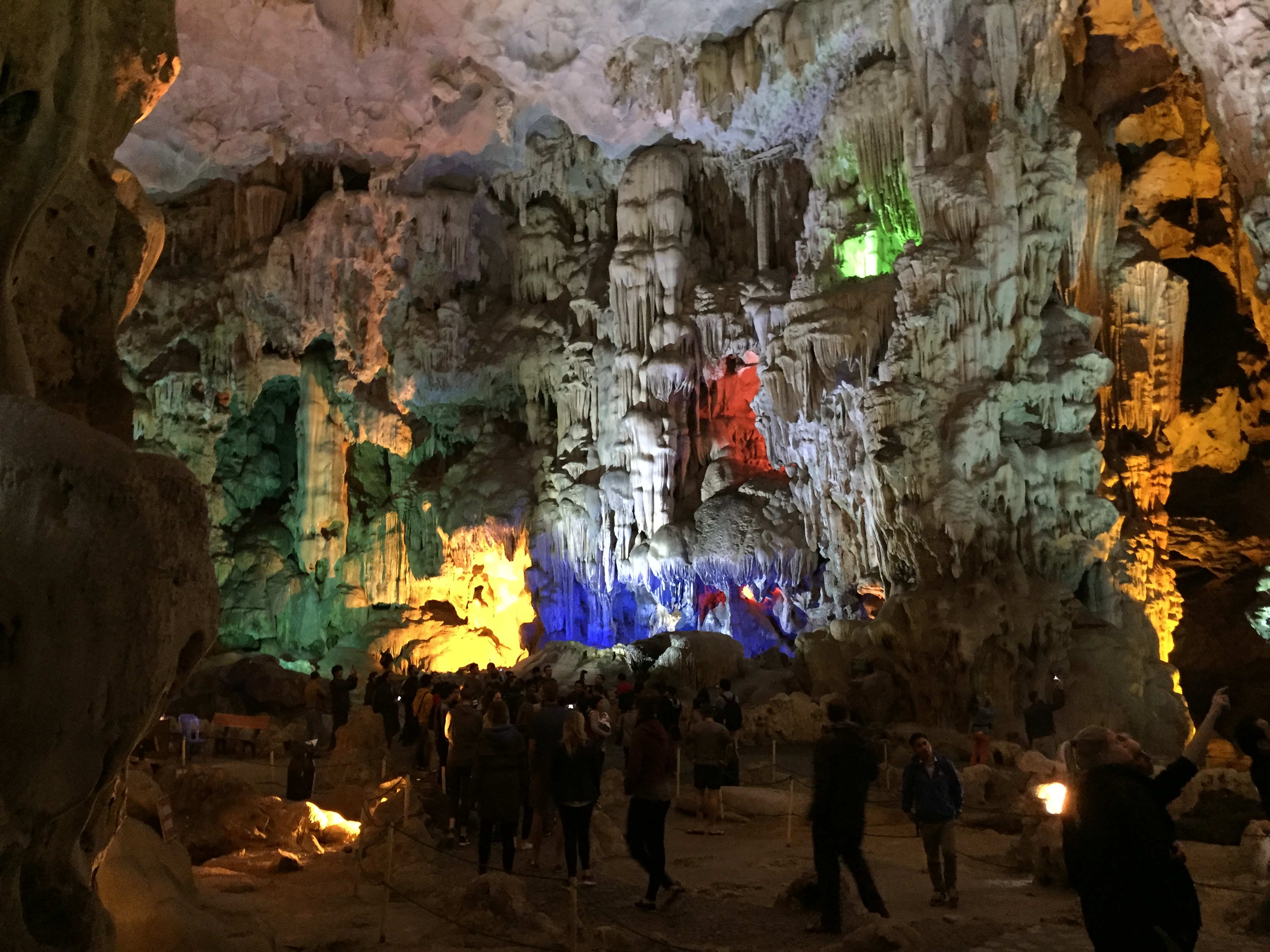 Halong Bay is a must for any visit to Vietnam! I’m so glad I was able to experience this world wonder! 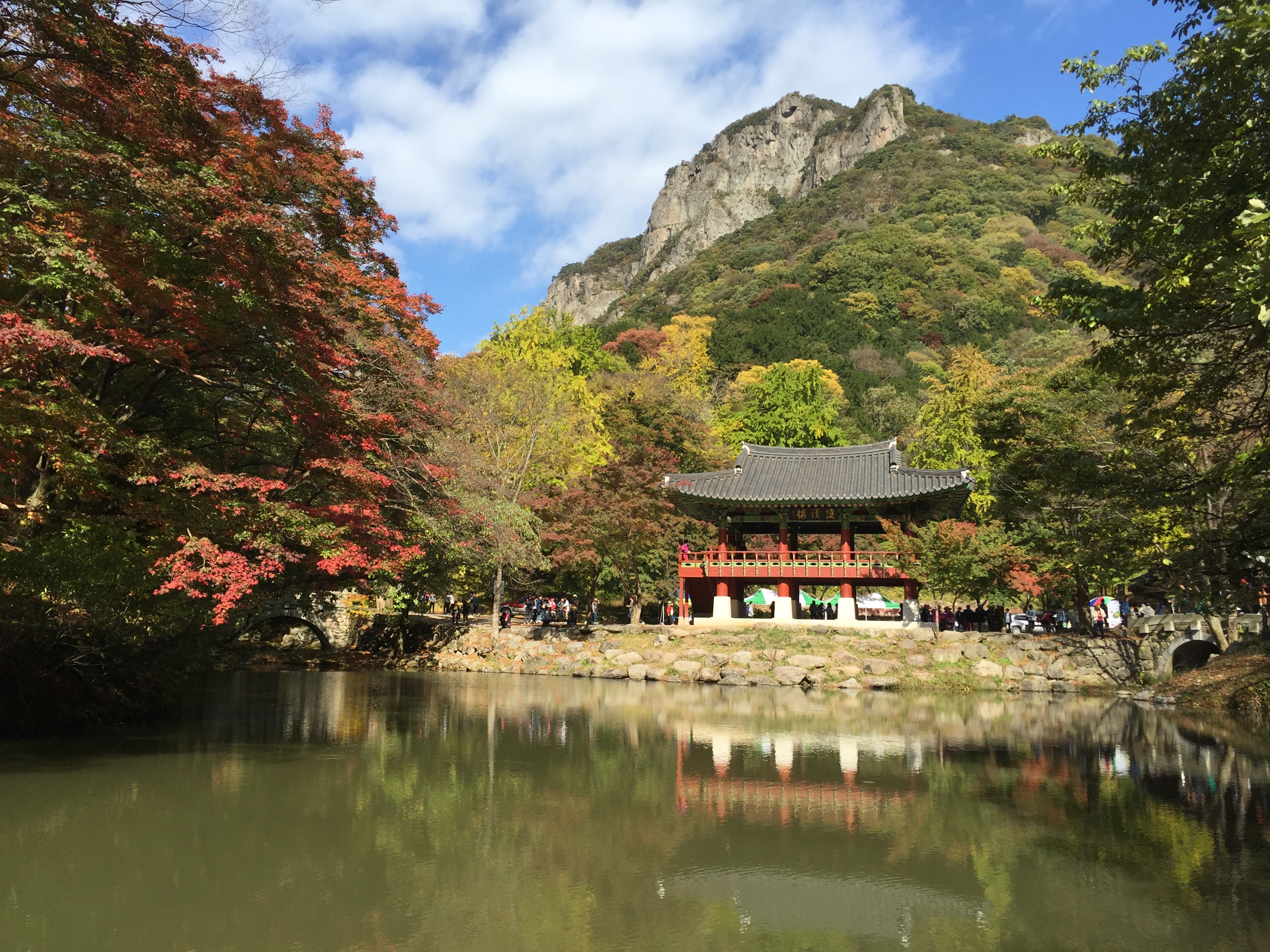 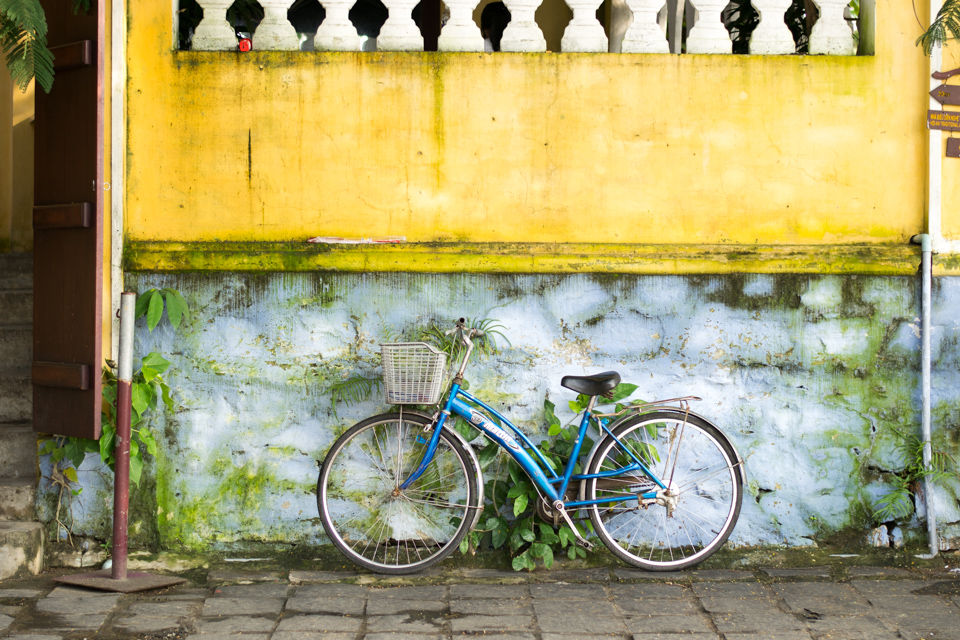 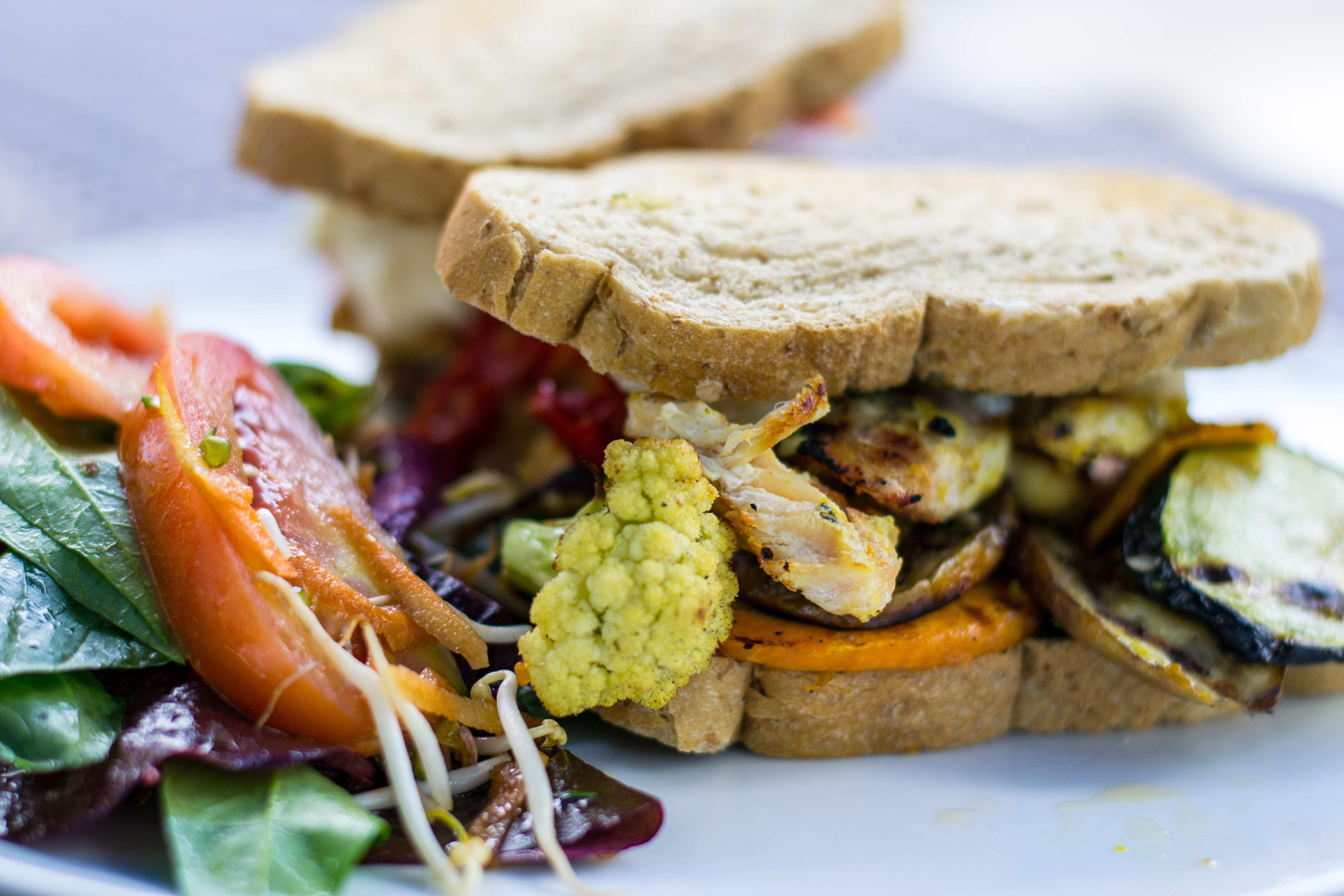 Where to Eat in Canggu, Bali: A Finicky Foodie’s Guide 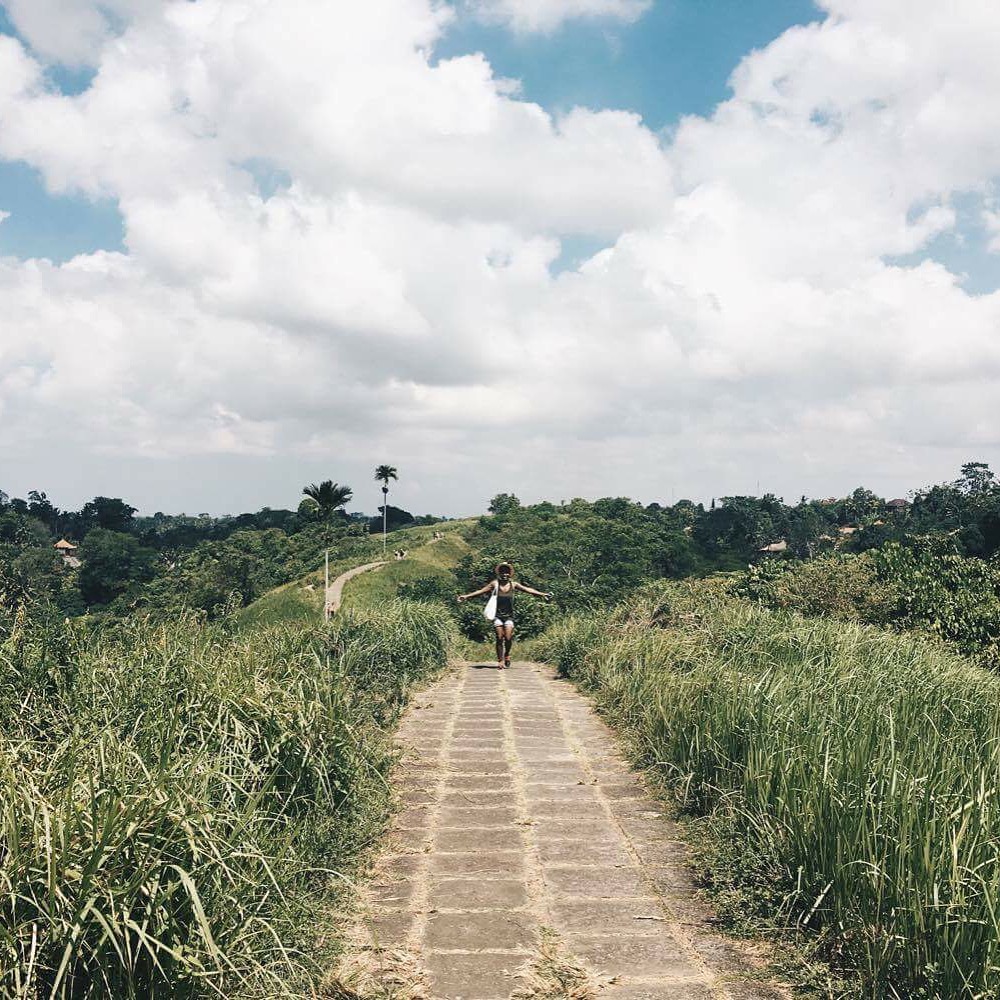 A Mini Guide to Canggu, Bali 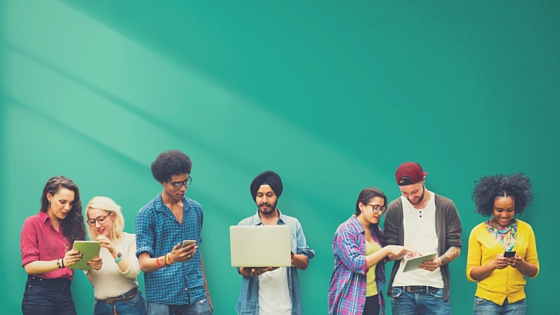